The Cradle of Western Civilization

Whether you’re looking for sun, sea, and sand or want to take your own odyssey into the magnificent mythos of Greece’s long and ancient history, this country of thousands of islands, endless olive groves, and endless hospitality is one of the world’s best travel destinations.

Discover the ruins of ancient Athenian democracy, following in the footsteps of ancient politicians like Perikles. Explore mystical Delphi and marvel at the still-impressive oracle. Embrace the laid-back taverna lifestyle where locals clink glasses of local red wine over mezze and fish.

Go island-hopping – perhaps you want to party in Mykonos, soak up Minoan history in Crete, marvel at the white hillsides of Santorini, or simply get away from it all on monastic Amorgos.  Greece is awash with culture, history, and one of the world’s greatest cuisines, all wrapped up in xenophilia – the long tradition of friendship to strangers.

Wake up in the wine country surrounding Thessaloniki, or discover the ancient, dark forests of Epirus. Walk into tiny Kafenieos (cafés) where old men drink ouzo, play backgammon in a thick fog of smoke, locked in a timeless moment of Greek culture. Dance like Zorba on the Cretan beaches of Akropoli, and free your spirit, ready to trek up Mt Olympus to the very home of the Gods themselves.

Embrace the unexpected and make new friends. Greece is a playground for your passions, where a new, sun-drenched adventure awaits around every corner.

Greece has given the world some amazing gifts; important areas in Greece, known for their beauty and historical significance, epic poems, fantastical myths, some of the greatest thinkers in philosophy, math, science, and much more.

Surround yourself in the green of Northern Greece and its rich history, from the ancient city-states to the Byzantine Empire and up until modern times. Starting in the capital city of the north, Thessaloniki, take the scenic route in the footsteps of Alexander the Great, be amazed by the Majestic Mount Olympus, find Meteora, an incredible spectacle or massive rock pillars rising up from a valley to form a truly rare sight, then through eastern Pelion Region, continue until you reach Delphi, ‘the navel of the world, end this 12-day tour in the streets of Athens, one of the most historic cities in the world.

Start your journey and drive to Thessaloniki city.

Enjoy the rest of the day at leisure, strolling the beautifully arranged streets of charming this charming city.

Get a first glimpse of the city, experience the historical, cultural and religious evolution of 6 cultures, 4 religions and 5 ethnicities in the depth of 2,500 years. Visit the city’s important landmarks such as “The White Tower” and “The Archaeological Museum”. Take in the whole of Thessaloniki at sunset, and witness what a sprawling, organic city it is.

Day 3: In the Footsteps of Alexander the Great

Our first stop is Pella, the ancient capital of the Macedonian Empire and native town of Alexander the Great, where we will visit the archaeological site and the Museum. Then continue to Vergina, where you will visit the most important remains of the monumental palace of the Kingdom of Macedonia. Have some free afternoon for shopping and exploring the city.

Drive from Thessaloniki for an excursion to the mythical mountain of the 12 Gods of Olympus, interwoven with the Greek mythology, is a challenging invitation to discover its greatness and capture amazing photos! Enjoy a short hike at Enipeas Gorge of mount Olympus, then continue to Litochoro village. Continue to the picturesque area of Meteora, a world Heritage site – makes this one of the most visited attractions in all Greece. This strange and beautiful landscape also offers wonderful opportunities

Participate in an amazing food & wine tour and discover the wealth of the mouth-watering local dishes. Enjoy a morning walk in the town of Kalambaka and later on a scenic drive through the villages around Meteora. Explore Meteora, a geological miracle that must be actually seen to be believed!

Visit one active monastery, the Byzantine church of the Virgin Mary, the renovated Hermitages of Badova.

While exploring the area, you will learn about the local traditions, myths, and history.

Start your day by visiting three more monasteries in the Meteora area and enjoy the stunning views of the rocks. After lunch, drive to Pelion, the mythical mountain of the Centaurs and the Argonauts and to the picturesque village to Tsagkarada.

Explore Eastern Pelion Region. The tour starts from the village of Tsagkarada where you can admire the one thousand years old big plane tree and stroll around the stone-paved streets. Head to Damouchari, the old picturesque gulf-traditional little port, world-wide famous from the Mamma Mia film, where you can swim, have lunch. Continue to Agios Ioannis, the most cosmopolitan village of the whole Eastern Region of Mount Pelion. End your day in Zagora, a beautiful village with a very characteristic traditional architecture.

Day 8: Mythical Delphi on your way to Athens

Depart to Athens via Delphi. A mythical journey to the place once considered the ‘’center of the earth’’. Learn about the ancient Temple of Apollo, home of the Oracle Pythia, the Ancient Stadium, home to the Pythian Games and the Archaeological museum with spectacular finds, then drive to Athens.

Our tour today is designed to give a true insight to this wonder and its extraordinary secrets, hitting the most important sights; constitution Square, the House of Parliament, the Memorial to the Unknown Soldier, and the National Library, then drive to the Acropolis, to the Temple of Olympian Zeus and the Panathenaic Stadium. Spend some time exploring the UNESCO World Heritage Site of the Acropolis, the ancient citadel located on a rocky outcrop overlooking the city. End your tour with a visit to the adjacent New Acropolis Museum, and explore the architectural masterpieces of the Golden Age of Athens.  End your day with private dining in Ancient Gourmet Restaurant.

Drive to Mycenae , visit the museum,  archaeological site, and King Agamemnon tomb. Its name was given to one of the greatest civilizations of Greek prehistory, the Mycenaean civilization. Continue with a wine tasting at Skouras winery. After lunch, tour Nafplion which is a lovely picturesque city of Peloponnese. According to mythology, the town was founded by Nafplion, the son of god Poseidon and the daughter of Danaus (Danaida) Anyone. Return to Athens in the afternoon.

Begin your journey to Cape Sounion, noted for the Temple of Poseidon. Visit the remains of the ancient Greek Temple of Poseidon, one of the major archeological monuments of the Golden Age, offering breathtaking panoramic views of the sea and surrounding islands. Return to Athens 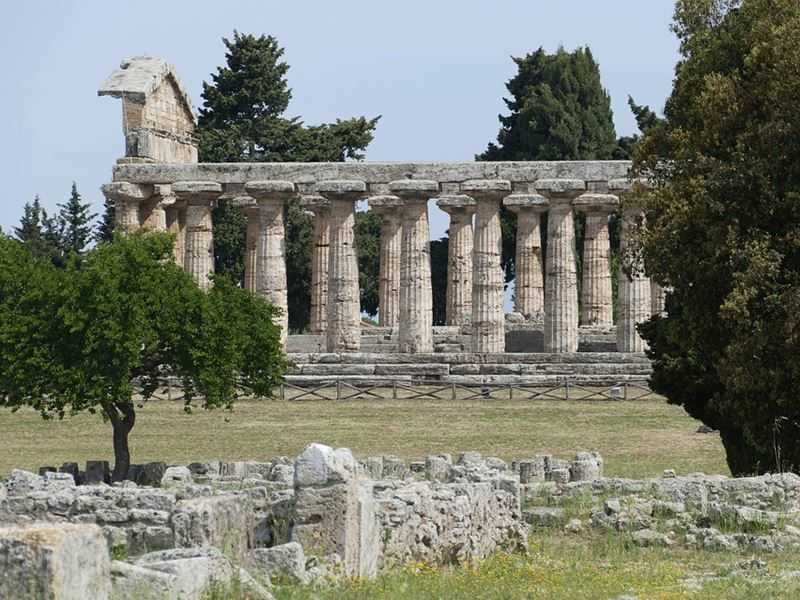 Have some free time to explore the city, shopping, wandering around before your flight back home. We may suggest optional activities if time permits.

It’s impossible to resist the scintillating allure of the Greek Islands – an oasis of whitewashed houses,

ancient monuments, and sidewalk cafes on the shores of the Aegean Sea.

We have built the ideal Greece itinerary 12 days long which takes to the most popular islands in Greece, from the enchanted island of Naxos, vibrant Mykonos and charming Santorini.

Finish your trip with several days in the mainland, including a stay in Athens, the Greek capital which is the de facto starting point for any adventure and a gateway to the islands.

Heavenly cuisine, rich history, sandy beaches, views that will make you swoon: What’s not to love?

Arrival in Athens. Drive to your accommodation and get ready for a festive welcome dinner at a special greek venue.

Our tour today is designed to give a true insight to this wonder and its extraordinary secrets, hitting the most important sights; constitution Square, the House of Parliament, the Memorial to the Unknown Soldier, and the National Library, then drive to the Acropolis, to the Temple of Olympian Zeus and the Panathenaic Stadium. Spend some time exploring the UNESCO World Heritage Site of the Acropolis, the ancient citadel located on a rocky outcrop overlooking the city. End your tour with a visit to the adjacent New Acropolis Museum, and explore the architectural masterpieces of the Golden Age of Athens. End your day with private dining in Ancient Gourmet Restaurant.

Participate in a delicious Athens food tour and discover a different side of the city by joining the Greeks in what is probably their favorite activity: eating! Visit food shops and the bustle of open-air markets, and charming delis. You’ll leave with a full and happy stomach and a much better understanding of the world of Greek food.

Transfer to Piraeus Port, to take the ferry and head to Mykonos Island, one of the most famous islands in the world. Enjoy an afternoon Mykonos town walking tour alongside wine tasting & Mezes. Continue onwards to the picturesque area of Alefkandra, known as the “Little Venice” of Mykonos. Admire the gorgeous old houses are perched precariously on the edge of the sea. End the afternoon with a stop at a local tavern for a sampling of Greek “meze” (Tapas dishes).

Mykonos is an idyllic setting for cycling – a naturally beautiful island with an exciting wine history that complements the scenic beauty of the volcanic terrain. Meet up with your private cycling guide, get equipped with a bike and gear, and set off on a leisurely cycling tour that navigates mostly flat road with minimal hills. Free afternoon to explore the island or relax at the hotel, and sun-kissed beaches.

Head towards the Old Port of Mykonos to board a public ferry to the UNESCO World Heritage Site on the islet of              Delos – a must-see for fans of history, archeology, and Greek mythology. Explore the remains of the Temple of Apollo, the Sanctuary of Artemis, the Old City, the Theatre Quarter, and stroll along the Terrace of lions. After exploring the ruins by visiting the Archeological Museum of Delos, home to an extensive collection of statues unearthed in Delos and its surroundings. Then board the ferry back to Mykonos and return to your hotel by private vehicle.

Transfer to Mykonos Port. Embarkation to the ferry and head to Naxos Island, the biggest and the greenest island in the Cyclades. It has high mountains, fertile valleys, lush green gorges, stunning seascapes and traditional villages perched high on mountain tops, where the inhabitants still wear their traditional dress and live off the fruits. Enjoy the rest of the day at leisure for relaxation and swimming.

Starting from Naxos town, our first stop is in Damalas village, where we can visit a traditional ceramics workshop and a restored traditional olive press.

Then continue to the village Halki with its mansions, the Byzantine church of Panagia Protothroni and the citrus distillery. Continue to Apiranthos village with its marble-paved alleys. On the way back, we visit the lush settings of Flerio, Melanes, an important area during antiquity.

Optional activities to choose from; Greek food organic table or hiking in paradise. Then experience textile on loom tradition- The textile on a loom is an old tradition on the island of Naxos. Visit Chalki Village, the old capital of Naxos where we will find the best weavers on the island.

Santorini may well have conquered a corner of your imagination before you’ve even set eyes on it.

Santorini is home to well-preserved ruins, a testament to several millennia of life on the island. Meet your private guide and driver to spend a half-day exploring Santorini’s most interesting sites, starting with the fascinating excavation site of Akrotiri. Then, drive to the coastal town of Oia, a vibrant artistic and cultural community with many Greek art galleries and a labyrinth of narrow streets lined with stunning architecture and ample boutiques to browse.

Departure transfer to the airport for your domestic flight to Athens.

Thank you for joining our Puzzle family!